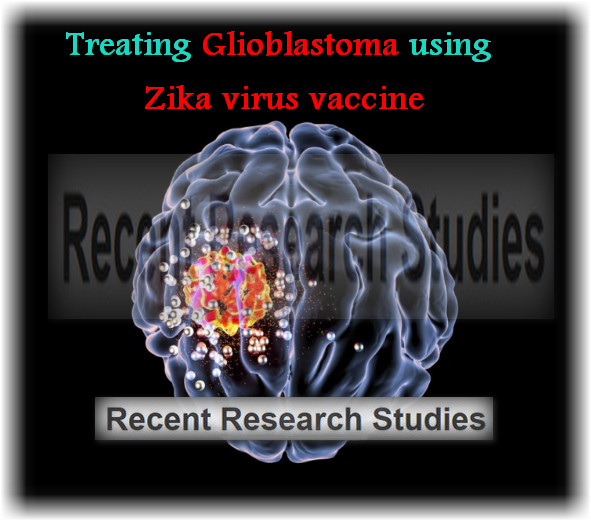 Summary: In a study which was published in mBio journal it was showed that There’s a promising treatment for fatal brain cancer – brain tumor treatment – depending on Zika virus vaccine which succeeded in destroying glioblastoma brain cancer stem cells.

What is glioblastoma brain cancer?

Glioblastoma which also called glioblastoma multiforme (GBM for short) is a very serious and dangerous malignant brain tumor where an extensive portion of tumor cells are reproducing and dividing at some random time, this malignant cell growth is nourished with abnormal blood vessels which formed by Angiogenesis process in the tumor.

GBM Brain tumor is comprised of many cell types; but it mainly consists of abnormal astrocytic cells beside some dead cells and cells of blood vessels, for regret this tumor cells can invade other parts in the brain, but it is very rare and uncommon to spread out of the brain.

What is Zika virus?

This virus infection is mostly spread due to the bite of an infected mosquito ( Ae. albopictus & Ae. aegypti) which bite people Throughout the day. For regret; Zika virus can pass through the infected mother placenta to her fetus during pregnancy and cause Serious birth defects.

It’s known that Glioblastoma is a fatal disease, which kills more than (15000) of people every year in the united states; because of the high recurrence rate of the disease even after undergoing surgery, chemotherapy or radiation therapy.

Scientists suggest that this recurrence occurs due to some cancer stem cells which called glioblastoma stem cells (GSCs) because these cells disappear after using different cancer therapies.

A team consist of international researchers succeeded in deploying Zika virus vaccine to target GSCs and destroy them in vivo (using mice model), Pei-Yong Shi said that they found that during the Zika virus infection in pregnant women; the virus affect the progenitor neural cells in the fetus; which lead to fetus microcephaly, So they suggested that the virus may also infect glioblastoma stem cells; because these cells have many properties similar to neural stem cells.

Shi also illustrated that he and his collaborators performed previous studies at Washington University which confirmed that Zika virus succeeded in killing GSCs in vitro and inside glioblastoma infected mice, and it is shown that Zika virus considerably less effective on attacking healthy and differentiated brain cells.

Therefore Shi said that if there is a reliable way to target GSCs (which are the main reason of the disease recurrence) by the virus; it might provide a vital way to cure and prevent the recurrence of glioblastoma.

But how using Zika virus without harmful side effects?

Shi and researchers team successfully developed an amazing (live-attenuated Zika vaccine) and called it (ZIKA – LAV) which is safe and have no virulent effect, and protect the experimental animals from the infection with the virus; the safety of this virus vaccine returns to the removing of a small part from the virus gene material which responsible for its replication; so that the virus can not be replicated inside the body.

When this attenuated virus was injected in the mice brain; there is no weight loss, no depression, no loss of appetite and the medical tests showed normal motor functions

The next challenging point of the study is discovering the effect of ZIKA – LAV on human GSCs, so the researchers performed their experiments by mixing GSCs from 2 different patients with ZIKA – LAV and injecting this mixture into  the brain of a mouse model; this experiment results showed that:

a) the mice injected with GSCs only developed the disease very fast.

b) the mice injected with (GSCs and ZIKA – LAV) mixture showed a delay in developing the tumor.

It also showed that the injection with the mixture prolonged the mice survival time by approximately fifty days, where the median survival time of the mice which injected by GSCs only is thirty days.

One of the study researchers said that the patient may be given the Zika vaccine at the time of the tumor removal surgery to remove the tumor as well as all GSCs completely.

What is the mechanism of killing GSCs using ZIKA – LAV?

For investigating the mechanism of killing GSCs using ZIKA – LAV; the researchers teamwork made a sequence for the gene material (RNA) messages of the treated GSCs with ZIKA – LAV and not treated GSCs, and they found that in the treated cells there is a very strong antivirus effect which triggered inflammations and finally killing cancerous cells effectively.

Furthermore; the study teamwork also said that they will perform further clinical studies and medical tests to make sure of the safety of using ZIKA – LAV as a therapy pathway for human glioblastoma patients; and there are some ideas to turned ZIKA – LAV into a cancer-killing machine; for example, by adding material which works as an immune system modulator, hence; when the attenuated virus kill the cancer cells, this modulator would be release and activate the systemic immune system to kill the rest of cancer cells.

This amazing study  is considered a combination of recent research studies which open a new way to invent cancer treatment (especially brain tumor treatment ) pathways rather than the traditional treatments which leave a serious harmful side effects, and we should shed light on the advantages of any “bad effect” of microorganisms to discover unexpected cancer treatments.