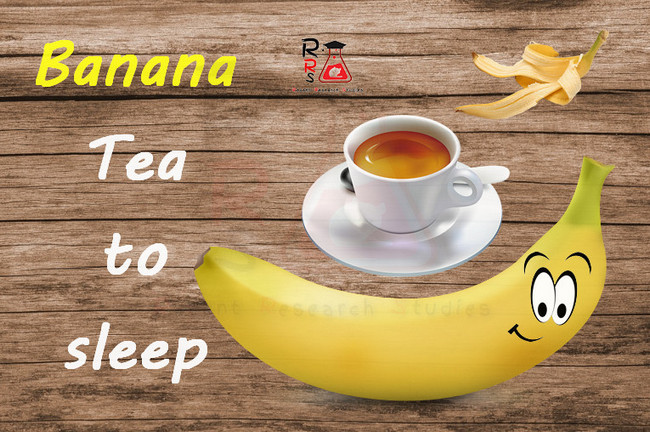 Using banana tea to sleep is an important benefit of banana, and there is no doubt that healthy food especially vegetables and fruits help greatly in fighting diseases and getting the ability to maintain all-over body health, and there are many recent research studies that succeeded in discovering the health benefits of banana, banana tea, and banana peel tea.

Banana fruit is one of the most popular fruits all over the world it is rich in nutrients and minerals, and it also can be used to make healthy banana tea.

We can get banana tea by boiling one or more whole bananas in water for nearly 15 minutes, then liquidation the liquid and drinking it

Depending on your preferences; you can add a few cinnamon or a spoon of natural honey to banana tea in order to improve its taste.

Many experts advise taking banana tea to sleep at night, Specifically, one hour before bedtime to help in getting calm sleep.

More than one study showed that banana peels aid in a noticed manner in improving sleep and treating insomnia, therefore; many experts also advise any person who suffers from sleep disorders to chewing some banana peels before bedtime (source)

Scientists described that the role of bananas in enhancing healthy sleep returns to their high content of magnesium, while there are many studies that linked the low level of magnesium in blood and poor quality sleep (Trusted Source).

While drinking banana tea before bedtime also helps greatly in getting rid of unhealthy sleep at night.

Banana and cinnamon tea for insomnia

Bananas contain an amino acid called tryptophan. Which triggers the production of brain chemicals such as serotonin which has a calming and sleep-promoting effect, so eating a banana before bed will help you sleep well.

On the other hand; Cinnamon promotes digestion and blood circulation.

For these reasons; all over the world, tea with banana and cinnamon is used as night coffee. Really, bananas and cinnamon have many health benefits, so you can always use this drink to – at least – improve the quality of your sleep.

Read also: causes of lack of sleep at night

Folk medicine experts say that drinking banana tea help in treating people who suffer from many health issues and there are some biochemistry studies that confirmed this hypothesizes, as follows:

Because of potassium high level in banana tea; it helps greatly in promoting circulatory system health and lowers the level of blood pressure, potassium also plays an important role in easing the tension of blood vessels (Trusted Source)

Banana tea contains a good amount of happiness hormone (Serotonin) and dopamine, so it helps in regulating the hormonal system inside the body, therefore boosting the psychological state (Trusted source)

And this explains why some experts consider banana tea is a vital and natural anti-depressant remedy.

There is another reason to drink banana tea for sleep; because it contains some chemicals such as dopamine, serotonin, and tryptophan; while there are some studies that linked between these chemicals and the ability to get uninterrupted healthy sleep (Trusted Source).

what happens if you boil a banana and drink the water

Many people ask what happens if you boil a banana and drink the water, and the scientists answer this question by illustrating the following benefits of banana boiling water:

It is well known that both potassium and magnesium minerals help in improving the functions of smooth muscles which line the digestive tract; thus regulating this tract movement and hence preventing digestive system disorders such as cramping, bloating and constipation besides enhancing nutritional components’ absorption (Trusted Sources).

Banana tea contains some antioxidants such as Vitamin C that play an important role in the formation of immune cells (white blood cells), besides vitamin A which helps in protecting from some eye diseases (Trusted Source).

the presence of magnesium and manganese minerals in banana tea makes it very useful for improving bone health and increasing its density, and decreasing the chance of developing osteoporosis as we age (Trusted Source).

Banana tea is not in isolation from obese patients at all; because many studies showed that it has high contents of both soluble and insoluble fibers which enhance the feeling of a full stomach and suppress the appetite, besides its role in raising the metabolism rate of carbs and fats, therefore banana tea is considered an influential agent in shedding weight naturally.

how to make banana tea

It is very easy to make banana tea recipe at home through the following method:

Banana peel tea is also packed with high percentages of minerals, vitamins fibers, neurotransmitters, and many other components which make it a very useful remedy for treating many health disorders, like:

Banana peel contains many anti-carcinogenic and anti-mutagenic materials which play a big role in preventing the transformation of normal cells to cancerous ones, banana peels also contain a high content of antioxidants such as carotenoids and polyphenols which help in fighting cancer development.

Banana peels have good percents of both soluble and insoluble fibers which exceed the content of fibers in banana fruit itself, hence it leaves lower levels of bad cholesterol in the blood, besides; the high content of potassium in these peels helps in enhancing heart health and regulating the blood pressure level.

As in banana tea; banana peel tea also helps in getting better and calm sleep due to the presence of tryptophan, a happiness hormone, and neurotransmitters that help in relaxing and falling asleep quickly.

Due to the high fiber content in banana peel; it plays a noticeable role in promoting feeling full and enhancing the rate of fat burning; thus getting rid of overweight easily. Depending on this role of banana tea, experts advise all people who suffer from obesity to take a cup of banana tea between meals in order to prevent hunger pangs and to decrease the calorie intake.

Banana peel tea is a good mood lifter because it has high contents of tryptophan material which helps in raising the level of the hormone of happiness and dopamine which helps in feeling good and relaxed.

There are some studies that confirmed the role of banana peel extract in regulating stress hormones and easing depression and sad feelings (Trusted source).

You can also make delicious and healthy banana peel tea according to the following method:

habitually; taking excessive amounts of any natural remedy or drug; leads to backfiring results, this also occurs when eating or drinking high amounts of banana, banana tea or banana peel tea, as follows:

Some people may suffer from nausea, vomiting, stomach pain, low blood pressure, and headache after drinking banana tea, and studies showed that the high intake of potassium is the reason for these side effects; because it may lead to a health condition called hyperkalemia (Trusted source).

When making banana tea or banana peel tea; you must use organic bananas; because using non-organic ones may lead to consuming high amounts of harmful chemical pesticides, especially during the steeping step of the banana or its peels in boiling water, which may lead to serious health disorders

In conclusion, we advise everyone to incorporate banana tea or banana peel tea into his diet to get the benefits of banana tea to sleep and its other amazing health benefits; BUT as usual, After consulting the physician.