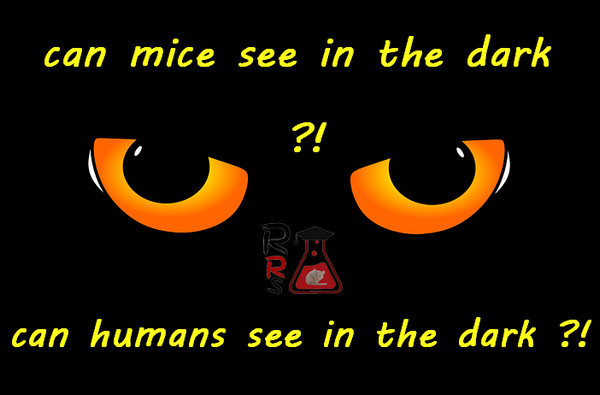 can mice see in the dark ?! when we ask this question; our thinking will heading completely to the myths’ logic and the vast majority of people will think that it is just a joke.

But let us say that it’s true; because of some scientists from Asia have succeeded in giving a night vision to mice in a study published on 29 October 2019 in cell journal

It’s well known that mammals like mice can see in the visible region which begins from 380 nm and ends with 740 nm, so they can’t see anything in the infrared light region (above 740 nm) and they can’t see also in the ultraviolet region (Below 380 nm).

can mice see in the dark

But in the current study, scientists at Science and Technology Chinese University in cooperation with some scientists from the United States succeeded in developing a type of nanoparticles that give mice the ability to see in the near-infrared region.

There are some confirming experiments that performed on mice’s physiological and behavioral reactions; to make sure that they indeed could see in the dark by using some additional techniques such as electroretinograms, single-photoreceptor recordings, and visual behavioral tests, and they confirmed that mice could actually see in the dark.

The study researchers gave additional information about their study results by saying:

The most important part of this study results is that researchers confirmed that this prepared nanoparticles didn’t interfere or leave any bad effect on the normal day vision.

And the effect of the injected nanoparticles on the mice lasted nearly 10 weeks without any negative side effects on mice’s eyes or on its overall health.

You may also interested in: Cats can recognize their own names

can humans see in the dark

You may surprise when knowing that this recent research study results confirmed that mice can see in the dark, but on another hand, the main aim of the study was not only to make this rodent see in the dark but also for using it in many human applications such as using these nanoparticles in correcting color blindness disease besides using it also in many military purposes.

Therefore, this study is considered one of the most recent and important studies in the field of bionanoscience