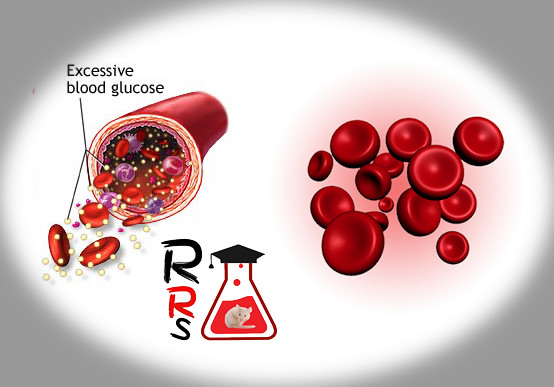 Red blood cells are considered one of the most important blood components because it carries oxygen to all body organs through the circulatory system which consists of Heart, arteries, veins, and blood capillaries.

In normal cases, the Red Blood Cells Morphology have a biconcave shape, high stability of cytoskeleton, its diameter is 8 μm and very high integrity of its plasma membrane, and this specific morphology allows these cells to pass easily through the various diameters of blood vessels and moving throughout all parts of the circulatory system without any deformation.

These high blood concentration of glucose leads to many health complications especially Heart diseases, retinopathy, Neuropathy, besides affecting the shape and size of red blood cells and so on.

there is new biochemistry and biomedical study illustrates that when the glucose level elevated in the blood; it results strongly in red blood cells morphology changes.

This study depends on the examination of red blood cells morphology in both diabetic patients group and non-diabetic people group, the scientists used Blood Films to analyze the cells by using a light microscope, and they found the following changes in RBCs morphology in the diabetic group:

beside that, the researchers found that nearly 1/3 of red blood cells have different size, while the non-diabetics have almost less than 2 % of unequal RBCs sizes.

The light microscope can’t detect the ultrastructure changes of RBCs; so, the study teamwork continued their experiments by using higher resolution imaging like the atomic force microscopy [AFM] and  the scanning electron microscopy [SEM], and they found the following ultrastructural changes in RBCs morphology:

There is an elongation in the membrane of the red blood cells, therefore it spontaneously forms some projections around the fibrin molecules, and for regret, this change in RBCs morphology leads to accumulation of fibrin which may result in the formation of a blood clot (thrombosis)

The scientists also observed an increase in the diameter of RBCs in many patients who diagnosed with diabetes by (10: 15 %), and it results in high blood viscosity.

The scientists referred this morphology change to the influx of glucose molecules which result in flattening and bloating of the RBCs.

This observation detected by using (AFM) through an excellent visual analysis, and this finding would give the ability to determine the presence and the progression rate of diabetes in details.

Depending on the Scanning electron microscopy; the scientists observed that RBCs membranes are smoother in diabetic patients, This was explained as a result of the damaging and rearrangements of proteins, besides the highly loss of lipids from the outer surface of RBCs membrane.

The increased rate of protein rearrangements in the RBCs membrane; leads to great weakness of these membranes, the study also showed that the cytoskeleton proteins maybe heavily glycosylated which badly affect the stability of RBCs membrane.

The presence of high concentrations of glucose in the bloodstream results in the adhering of RBCs to each other and to the internal wall of the blood vessels, the scientists think that this effect may result in dysfunctions in the cardiovascular system, thus increasing the risk of developing cardiovascular diseases in diabetic people.