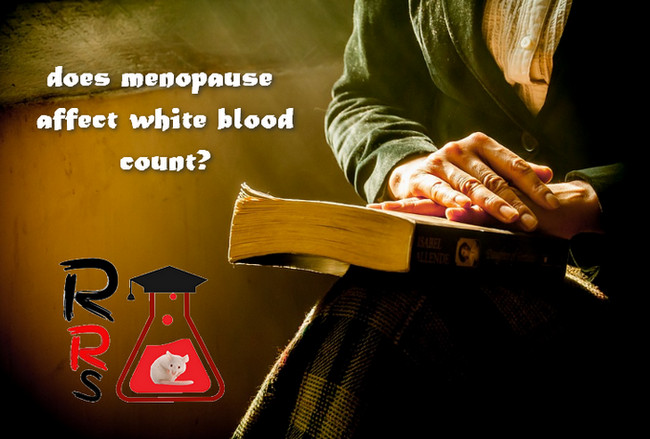 Menopause term is defined as a phenomenon occurs to women between the age of (45: 55 years), at which the women exposed to an absence of menstrual activity, and this occurs because they lose the development of ovarian follicles by they age.

We can say that the woman reached the Menopause age when there are consecutive 12 months without menstrual activity after her last menstrual cycle.

During this transition phase, the woman’s ovary produces less amount of estrogen, therefore there is a decrease in 17β-estradiol level, while there is an increase in the level of another hormone called (follicle stimulating hormone), and once reaching the menopause she develops estrogen hormone deficiency.

Menopause leads to many health disorders such as cognitive impairments, low bone density, physiological disorders, low muscle strength, highly change in body mass and so on.

What is White blood cells

White blood cells also called leukocytes or immune cells because it considered the main component of the immune system, it moves through the bloodstream and destroys any microorganism threatens our health.

These cells formed in the bone marrow and stored in our blood and inside lymph tissues, and there are many types of white blood cells includes Neutrophils, Monocytes, Lymphocytes, Basophils, and Eosinophils.

the study also referred that some white blood cells types such as lymphocytes and neutrophils are considered the main mediators of some inflammatory reactions, and the low-grade inflammations may be increased with aging, so that, the menopausal women may suffer from many types of chronic diseases.

These results are thought to give important data about the hormonal disorders during menopause which will help the scientists to improve and enhance the health of woman at menopause age.

Platelets play a very important role in thrombosis process; so it is the key of endometrial hemostasis after menstrual. In menopause, there’s a low level of estrogen hormone which may be responsible for the low platelets count, besides the decrease of platelets activation during post-menopause.

Some studies showed that the menopause women have a higher level of (Red blood cells count, Hemoglobin, Mean cell volume, and Hematocrit), These results are attributed to the hormonal disorders during menopause besides the cessation of menstrual (bleeding) which cause a high level of iron deficiency.