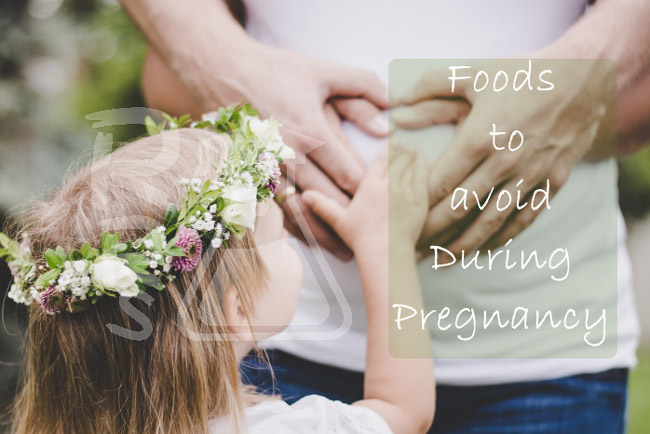 Pregnancy period is considered as one of the most sensitive time in your entire life because you need to follow some rules in order to live this period safely.

The most important rule during pregnancy is what you can and cannot need to eat, so we will tell you today on recent research studies the foods you need to avoid during this period.

Foods to avoid during pregnancy

Every pregnant woman needs to take care of what she eats during pregnancy because she will always be more susceptible to foodborne illnesses because of the immunological condition created by pregnancy.

Therefore, you need to be aware of certain foods, which you need to avoid because they can put you and your baby at risk, and we will tell you those foods in the following lines:

There is some kind of fish, which is called high-mercury fish, it is one of the most dangerous food you can eat during pregnancy because it is most commonly found in polluted water.

If you eat large amounts of this kind of fish, then it can be toxic to your nervous system, immune system, and kidneys, which will make you and your baby in danger.

The popular kinds of high-mercury fish, such as shark, swordfish, and king mackerel.

Pregnant women should also avoid kinds of seafood whether refrigerated or smoked; because it maybe contaminated with some harmful microorganisms such as listeria, which considered very dangerous to mom and fetus.

During pregnancy you should avoid these kinds of seafood: Sushi, Raw Oysters, Ceviche, Raw Clams and, Sashimi.

It will be good for every pregnant woman to avoid unpasteurized dairy products, such as milk, cheese, and yogurt, you can only eat the cheese that made from pasteurized milk or cooked at high temperatures.

The popular types of cheese you should stay away from them are:

Instead, you can eat some other types of cheese during pregnancy safely, such as:

Pregnant women will suffer from many several bacteria or parasites such as Toxoplasma, E. coli, Listeria and Salmonella because of the raw meat, which is responsible for increasing your risk of infection from bacteria.

Those kinds of bacteria can be dangerous for your health and your baby’s health as well, and it can also make your baby suffer from severe neurological illnesses, including intellectual disability, blindness, and epilepsy.

You will also need to stay away from whole cuts of meat, such as tenderloins, sirloins or ribeye from beef, lamb, and veal.

Therefore, we can say that pregnant women can eat meat when it has been reheated until steaming hot.

We cannot say that you need to avoid all kinds of eggs, you will only need to stay away from raw eggs because they can be contaminated with Salmonella, which is one of the most dangerous infections that can cause fever, nausea, vomiting, stomach cramps and diarrhea to all the pregnant women.

Some women can suffer from cramps in the uterus because of eating these raw eggs, and it will lead to premature birth or stillbirth.

Therefore, you need to stay away from the upcoming foods because they commonly contain raw eggs:

You may also interested in: diabetes in pregnancy risks to baby

All the raw sprouts will be your enemy when you are pregnant; because they are contaminated with bacteria, so they will make your life and your baby in danger by the time.

You will notice that all the raw sprouts are almost impossible to wash off so you cannot get rid of the bacteria at all, so they will only be safe for you to consume after they have been cooked.

We all know that pregnant women always need to eat huge amounts of many essential nutrients, including protein, folate, and iron, they will also need to follow a diet in order to make their weight perfect with the baby.

Your diet needs to be free of junk foods because they are low in nutrients and high in calories, sugar, and added fats, which will be so bad for you and your baby too.

Junk foods will make you gain so much weight and this is not good for your baby at all during pregnancy because it will be linked to many complications and diseases, including an increased risk of gestational diabetes.

During pregnancy, you should limit your caffeine intake as possible; because it is absorbed quickly and pass easily through the placenta to the baby, while the fetus doesn’t have yet the enzymes which responsible of caffeine metabolism, so it accumulated in baby’s blood.

In the same context, there is a study published in 2014, confirmed that the high intake of caffeine during pregnancy period; leading to serious dangers such as restricting baby growth plus decreasing its weight at delivery.

Generally, Alcohols are very harmful, and during pregnancy, you should completely stay away from taking alcohols drinks.

The recent studies confirmed that alcohols make the women at high risk of miscarriage and stillbirth.

It also leaves bad effects on brain development and all parts of the nervous system of the fetus plus facial deformities and respiratory system defects.

Note: Any amount of alcohols whether low or high during pregnancy is very dangerous, so you should altogether avoid it.

No doubt that fruits and vegetables are mainly required during pregnancy, however, they sometimes maybe source of infections unless you wash it carefully; because its outer surface maybe contaminated with toxoplasmosis parasite from the soil where they were grown.

One thought on “Foods to avoid during pregnancy”