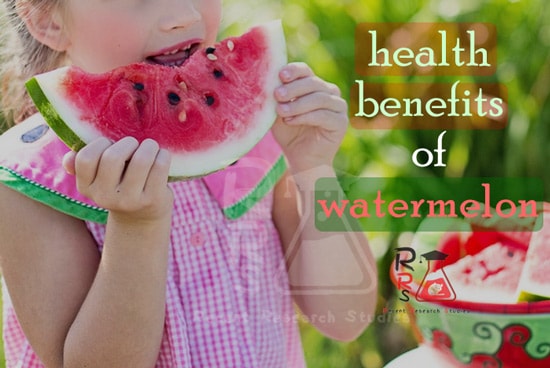 This delicious and refreshing fruit that’s called (Watermelon) have also many important health benefits for you, for example; one cup of fresh watermelon contains only 46.2 calories, besides, it is rich in some minerals and vitamins such as Vitamin A and the Ascorbic acid (Vitamin C). Watermelon also helps you to provide your body with more than one type of Phytocompounds.

You can imagine the health benefits of watermelon by knowing that one cup of Fresh Watermelon (nearly 154 gram) contains high percentages of the reference daily intake (RDI) of many minerals and vitamins as follows:

There is no need to worry about weight gain if you are eating watermelon regularly; because watermelon has a high content of water and dietary fibers and it also contains very low amounts of calories (2 cups contain only 80 calories).

So, watermelon will be making you feel full and don’t need to eat more foods, besides, watermelon has appropriate levels of natural sugars which will help in satisfying your body’s cravings for sweet foods.

In a 2008 study; researchers found that watermelon contains an amino acid called (citrulline) which plays an important role in dilating and relaxing the blood vessels, and it mimics the effect of Erectile dysfunction‘s drugs inside the body.

Dr. Bhimu Patil says that citrulline amino acid is converted into another amino acid called Arginine, where arginine is the main source of nitric oxide which considered a great blood vessel dilator.

Patil also said that 4 ounces of watermelon (nearly 10 small balls) contain about 150 mg of amino acid citrulline, which means that watermelon is a vital treatment for men’s infertility problems.

Note: You can use roasted watermelon seeds as a snack instead of unhealthy fried potatoes chips or and any other unhealthy bad snacks.

surely everyone noticed that Watermelon has high water content, and for this reason; watermelon helps greatly in hydrating and moisturizing all body parts especially skin and protecting us from dehydrating, and it also acts as a skin toner to refresh the skin.

On another hand, as we get older our bodies form high amounts of Free radicals which have a damaging effect on our body cells and skin and may lead to the appearance of aging signs. Watermelon has high levels of antioxidants such as Lycopene, Vitamin A and vitamin C which help greatly in fighting these free radicals and slow down the aging signs, while vitamins A and C have a role in forming some proteins (Collagen and elastin) that help our skin stay young and supple.

Watermelon may also help in eliminating acne; because it has a high amount of vitamin A that play a role in reducing the size of skin pores and it also reducing the oil secretion from sebaceous glands.

Seedless watermelon is a type of hybrid watermelon which has been planted in many countries for more than 5 decades, it is worth to mention that seedless watermelon isn’t genetically modified; so there are no concerns about eating it, and it also gives the body all benefits which we get from the traditional watermelon.

because watermelon is backed with a high amount of potassium; it may result in disorders of heartbeat rate and it also can lead to a significant drop in blood pressure level.

In rare cases; some people can exhibit some allergic reactions toward one or more of watermelon or watermelon juice components, and these symptoms include digestive system disorders, vomiting, nausea, and itching.

So; we advise everyone regardless of having allergies to watermelon or not; to eat this fruit or drink its juice in moderation.

2 thoughts on “health benefits of watermelon”