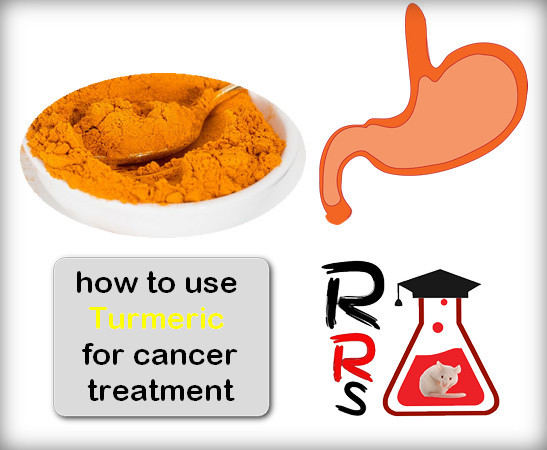 how to use turmeric for cancer treatment ? Turmeric or Curcumin is used widely to give flavor and yellow color to food, but recently the scientists uncovered that this great yellow powder help in preventing some cancer types like stomach cancer.

how to use turmeric for cancer treatment

In a study performed in Brazil and published in the journal Epigenomics in 2019; professor Danielle Queiroz Calcagno, (1st author of the study) said that they made many reviews in all scientific reports which related to all plants, nutrients and bioactive materials that have the ability to prevent or combat stomach cancer, and they found that curcumin is an important one of them.

the author also explained that some compounds such as Vitamin D3, resveratrol, and quercetin have the ability to treat and prevent stomach cancer because they are considered natural regulators of a protein called Histone.

“Note 1: Histones are natural proteins found inside cell nucleus and have a role in the organization of DNA double helix into some units (nucleosomes), and each of these nucleosomes consist of DNA coiled around 8 histones, and this form compact the DNA, therefore, it fits in the cells and packaged into chromatin. Thus any mutation in these proteins such as methylation or acetylation leads to a bad effect on chromatin compaction and as a result, effect on Gene expression“.

Calcagno said for example, in the case of acetylation of histones, chromatin will lose a part of its condensation and the genes in this region of DNA will be susceptible to be expressed and on the contrary, if these histones aren’t undergone acetylation, the chromatin, as a result, will be very condensed so that the gene will not be expressed.

how to take turmeric for cancer

The researches in recent decades suggested that any modification in the histones result in many changes in gene expression without leaving effects on DNA sequence, and these “epigenetic” alterations are the main cause in the development of different cancer types.

So one of the study’s authors decided to determine that this hypothesis actually occurs also in stomach cancer, so he studied the presence of histones acetylation in some stomach cells from patients with stomach cancer and from healthy individuals

And as a result, the study teamwork found that the stomach cells from stomach cancer patients have some alterations and changes in some enzymes related to histones such as histone acetyltransferases and histone deacetylases, and these modifications are “epigenetic” and leave effects on the integrity and the structure of the genome material in many cancer types among them the stomach cancer.

while the recent scientific studies have shown that the bioactive materials and nutrients such as Turmeric (curcumin) can regulate the activity of these two enzymes (histone acetyltransferases and histone deacetylases), the authors of this study (at UNIFESP and UFPA) sought to know if this regulation of enzymes can control histone acetylation and thus success in preventing or combating stomach cancer.

And they also found that Curcumin controls the histones modifications firstly by inhibiting the two enzymes “histone acetyltransferases (HATs) and histone deacetylases (HDACs) so that it decreases cancer cell division and proliferation besides the induction of the programmed cell death (a process called apoptosis), So Curcumin surely has an important role in preventing and treating stomach cancer.

At the end, Calcagno explained their results by saying that curcumin and some other bioactive compounds can activate or repress the genes which responsible for stomach cancer development through making inhibition or activation of histone acetylation process.

By the way, Dr. Calcagno said that he and the other scientists plan to uncover “anticancer” and “epigenetic” properties of some new natural compounds derived from some other plants such as “nanche” and “Euterpe oleracea” to use them in the future in preventing and treating stomach cancer.

One thought on “how to use turmeric for cancer treatment”