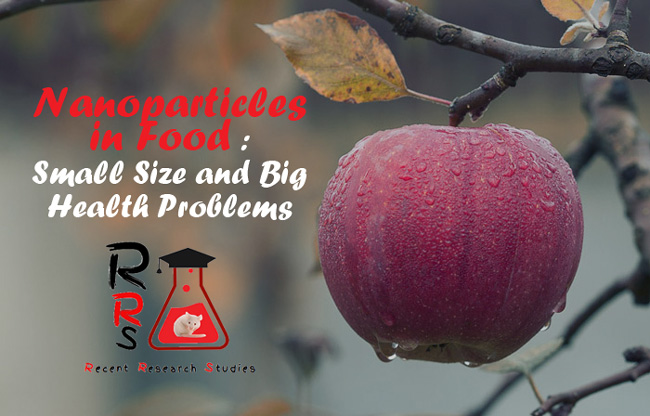 We always choose food and all nutritional products according to how they taste, look, and how can they make our health better, Now there is a big direction to use nanoparticles in the food industry for making them better and tasty.

However, some persons are concerned about the bad effects of nanoparticles on health, besides, France recently announced that one type of nanoparticles which used as a food additive will be completely banned from using With the beginning of 2020 because there is no evidence to confirm its safety.

What is a nanoparticle?

Nanoparticles are pretty tiny particles, and their dimensions are equal to 10–9 meter, these particles can be made from metals such as gold, silver, graphene or any other materials, each nanoparticle differs from the others in its chemical, physical properties and whether it is safe to use or not.

Nanoparticles also can be occurred naturally or manufactured by scientists, for example, we can find it naturally in the dust, ash, waterways, sands, and in some biological organisms like viruses. But when using them in biological science, scientific research, medicine, or industry; nanoparticles are manufactured to control their properties completely.

The positive effects of nanoparticles return to their very small sizes because they can reach the difficult-to-reach parts of the human body, therefore, playing a great role in the diagnosis and the treatment of some diseases especially infections and cancer. In industry, nanoparticles can enhance the strength, conductivity of materials, and so on.

But some nanoparticles may be entered and consumed inside the body through some food products which make many people wonder how we can identify if these consumed nanoparticles are safe or not?.

Everyone should know that nanoparticles occur naturally in some food such as the nano-sized casein micelles in milk which made of protein, and these nano-micelles facilitate casein absorption inside our bodies.

Beside that, we create nanoparticles during food digestion such as while grinding, emulsification, homogenization, and so on.

you must also know that we make a huge number of nanoparticles while handling with dishwashing with detergents, while using cooking instruments over time and others

Surely food additives are used all over the world, and one of the most common food additives is (Titanium dioxide – E171) a whitening agent which is added as a powder, so some of the powder particles will present in the nano size.

But for regret, some recent research studies which performed on mice showed that titanium dioxide leaves an impact effect on the useful bacteria inside the guts.

This may sound very dangerous, but we should notice that these results occurred when the mice received a big dose of Titanium dioxide (50 mg per Kg of the mice body weight) every day for a long time, which considered a very high percentage when compared with the dose that the human gets.

Add to this that the titanium dioxide was also added to the mice’s drinking water without any other food; so there are no any food particles to bind with the titanium particles as occurring inside human bodies.

However, there are some reviews in 2015 commissioned from (Food Standards Australia New Zealand) which gave some evidence that the nanoparticles and the microparticles of Titanium dioxide have the same chance of absorbance inside the body and the majority of it is excreted.

Scientists are seeking now to bring new nanoparticles benefits to food products such as making the food more healthier, more tasty, and easy to absorb.

For example, the nanoparticles of sugar and salt may help in making them more healthier, because of the small size of them will facilitate and accelerate their access to the taste buds on the tongue; so it will decrease the amount of sugar or salt which is needed to get the sweet or salty hit, and so on.

But at the same time; Testing for toxicity of any food nanoparticles will be the main and the important part before bringing them to the markets.

You can find more from: Bio-Nano-Science