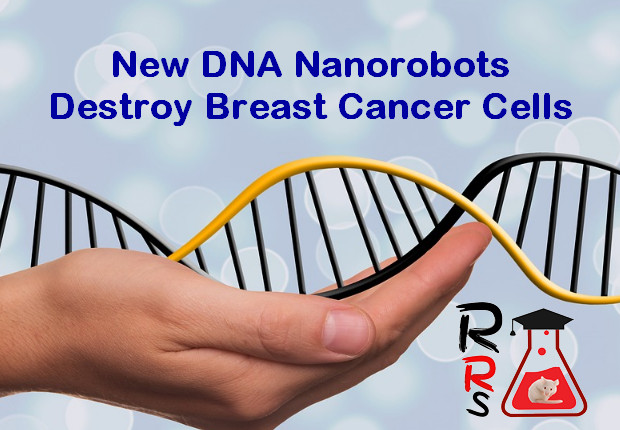 According to many statistics; it is shown that nearly 20 % of breast cancer form very high levels of a protein called human epidermal growth factor receptor 2 (shortly known as HER2), and this protein helps greatly in the uncontrolled proliferation of breast cancer cells, and for regret HER2 also resulted in the poor prognosis of this disease.

nowadays, some scientists have developed a new DNA nanorobot which has the ability to recognize and target the protein HER2 on the breast cancer cells, therefore, destroying them. And these results were reported in the journal of ACS Nano Letters.

The current treatments of HER2 breast cancer such as monoclonal antibodies work through binding to the HER2 protein and directing it to lysosomes for bio-degrading it. This type of treatment results in lowering HER2 levels, decreasing breast cancer cells proliferation and triggering cell death. But on another hand, these monoclonal antibody therapies leave very hard side effects and is very expensive.

In other previous studies, scientists have identified a small sequence of DNA (aptamer) that have the ability to recognize and bind to HER2 proteins and targeting them to the lysosomes, But this aptamer is less stable in the blood (serum), So that, the scientists sought to know if adding a new DNA nanostructure (Tetrahedral framework nucleic acid – tFNA) could enhance the biostability and the anti-cancer properties of the aptamer.

To find this out, the study teamwork has designed new DNA nanorobots which consist of (tFNA + HER2 aptamer), and when these nanorobots were injected into the mice, it persisted in the blood for a long time nearly more than the twice as long as the aptamer alone. After that, the researchers tested the nanorobots on 3 breast cancer cell lines in-vitro, and it showed that these nanorobots killed the HER2 positive cancer cells only.

The results also showed that the tFNA increases the rate of binding of the aptamer to HER2, therefore, reducing the level of HER2 on the cell surface.

Nanorobots is easier to prepare and less expensive when compared with monoclonal antibodies therapy, but mostly it needs further studies and improvements before testing it on human clinical trials.