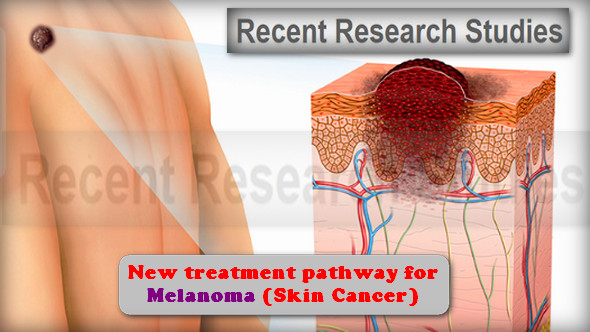 Summary: Scientists used a technique by which they discovered the spreading pathway of cancer cells in Melanoma, hence; invent a treatment pathway and prevent the metastasis of the cancerous cells.

Melanoma is a type of skin cancer which is heterogeneous cancer because it consists of different and many cell types which differ in their effect on cancer metastasis to other body organs.

The main symptoms of Melanoma is the appearance of moles, this moles can appear in any part of the skin; but it commonly appears on the back in males, and on the legs in females, it rare to appear in somebody areas such as the scalp and the parts which protected from harmful UV sun rays.

Sometimes, Melanoma has more one shape and color, and it also may be bloody and itchy. The treatment of melanoma depends on its stage, as follows:

A) At early stages, the surgical treatment can be successful.

B) At advanced stages, the treatment focused on preventing melanoma cancer cells from spreading.

There’s a new way for Melanoma Treatment … How?

Melanoma is spread to other body organs by an inverse axis between 2 genes: Melanogenesis Associated Transcription Factor (MITF ) and BRN2.

The BRN2 transcription factor is responsible for melanoma metastasis, however the mechanism of this process  wasn’t characterized and couldn’t be targeted by drugs; the current study which published in journal EBiomedicine has revealed the mechanism of metastasis process in melanoma and showed the role of the regulatory factors which participate in this process which are: BRN2, NFIB, and EZH2.

The study indicated that NFIB اhas a critical role in driving the metastasis process by BRN2, and the most important point is that this metastasis process occurs by EZH2 enzyme gene which can be targeted by the drugs and therefore inhibiting melanoma cancer cells from spread to other body organs.

Dr. Aaron Smith (one of the study authors) said that the cancer disease dangerous being in its metastasis to other body parts, and if the only problem of the disease is its uncontrolled growth; it would be easily treated by surgery. For melanoma, it is one of the most lethal and difficult cancer types to be treated because of its rapid spread.

So the study teamwork succeeded in uncovering the reason and the mechanism of this melanoma cells behavior switching, and the most important thing in the study findings is the breakthrough of one part of the metastasis process which can be targeted by drugs to stop melanoma cells from switching to invasive ones; and therefore prevent the cancer invasion to other body organs.

He also illustrates the role of the melanoma metastasis regulatory factors MITF and BRN2 saying that BRN2 decreases MITF gene expression, therefore, reduces the proliferation of the cells and convert them to invasive and migratory type.

The teamwork of this study understood the pathway that allows the BRN2 to convert cells to the invasive mode, which occurs firstly by increasing the expression rate of NFIB gene which is another regulating factor that controls the invasive switching process in this cells. and they also found a vital and important target to NFIB and this target is EZH2 enzyme which results in a wide range of changes and effects to cells properties and activity.

Smith adds that EZH2 enhances the expression of the invasive genes and at the same time it turns MITF off, therefore it prevents cells proliferation and re-enforces the cells invasive ability; and when the tumor cell migrate to another part of the body its behavior changes because there is no invasive signal so it resets MITF system and turns over from invasive to proliferative mode; thus resulting in tumor growth in this new body part.

Authors of this study said that the previous mechanism of tumor metastasis may occur in some other cancer types such as lung cancer.

After uncovering the mechanism of tumor metastasis process in melanoma; and the finding that one of the metastasis regulators is druggable (can be targeted with drugs), we can to tell you that there are chemical drugs that target EZH2 and now it is under the pre-clinical trials, which could be a vital and effective treatment to prevent melanoma spreading to other body tissues and organs.